History of Cycling in Waltham Forest

Posted on 7 February 2016 by analogpuss

Waltham Forest has had a long association with the bicycle, with the inventor of the safety bicycle John Kemp Starley, being born in Church Lane in Walthamstow in 1854.

In 1885 Starley made history when he produced the Rover Safety Bicycle.[6][7] – a rear-wheel-drive, chain-driven cycle with two similar-sized wheels, making it more stable than the previous high wheeler designs. Cycling magazine said the Rover had ‘set the pattern to the world’ and the phrase was used in their advertising for many years. 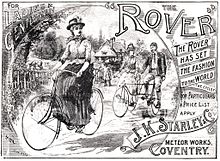 John Starley died suddenly in 1901 and was succeeded as managing director of the firm by Harry Smyth. Soon after his death the Rover company began building motorcycles and then cars.

The iconic Ancient House in the heart of Walthamstow Village is a 15th century ‘hall’ house;  in the 19th century shop fronts were added, and for many years it was used as a cycle shop and tearooms.

Master frame-builder H R (Dick) Morris was born in Walthamstow in 1912. In the 1920s he worked for cycle builder Fred Saunders at 28 Orford Road, and when this business closed down in 1953 he started a frame building and cycle works shop at the same address which ran until 1985. More information about his career here.

Heales Cycles in Highams Park was established in 1936 and is the oldest bike shop in the borough.

In recent years we’ve had the Olympics on our doorstep, the Tour de France passing through and the mini-Holland scheme, plus a lot in the preceding half century. If you could contribute to ‘Part two’ and help bring this up to the present day, please get in touch!

This entry was posted in Uncategorized. Bookmark the permalink.

This site uses Akismet to reduce spam. Learn how your comment data is processed.